Can I Get Charged With Theft in San Antonio if My Friend Was the One that Stole? 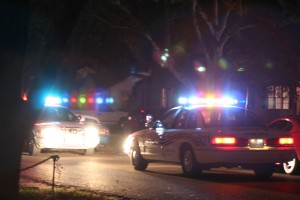 Yes.  You can and may be criminally responsible for a crime, even if your “friend” was the actor in the crime and you just stood by and watched.  The law is 7.01 and 7.02 of the Texas Penal Code, more casually referred to as the “Law of Parties”.  What this part of the Texas Penal Code essentially says is that regardless of your role in the crime, you are just as guilty as the main actor, just for being there and helping in any way shape or form.  Say you are with your friend, who plans to take revenge on an ex-lover by assaulting her.  Your friend walks up and assaults the ex.  You stand by on the look out for people to come up and stop the fight.  For this standing by on the lookout, you could be charged with assault.  Or, say you stood there and cheered the actor on in the violence.  You could be charged with assault.  The Law of Parties specifically states:

§ 7.01. PARTIES TO OFFENSES.  (a) A person is criminally  responsible as a party to an offense if the offense is committed by  his own conduct, by the conduct of another for which he is  criminally responsible, or by both.       (b)  Each party to an offense may be charged with commission  of the offense.        (c)  All traditional distinctions between accomplices and  principals are abolished by this section, and each party to an  offense may be charged and convicted without alleging that he acted  as a principal or accomplice.

Now, if you are charged with a crime, by no means, should you read this blog article and plead guilty to an offense, which you were not the actor on.  Instead, you should hire a criminal defense lawyer and consider any defense you may have.  Often times, young people succumb to peer pressure in a fleeting moment that results in an unforeseen criminal charge.  There may be a good defense to your case.  Consider the language of 7.02 cited above.  The law states that the “helper” must have intentionally promoted, assisted or aided the commission of the offense.